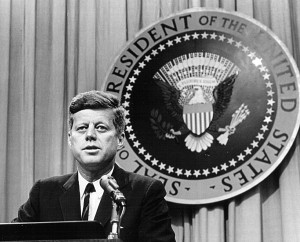 OK, here’s my contribution to the “Where Were You When President Kennedy Was Shot?” discussion. It being a Friday, I was driving to the bank in Oklahoma City to deposit my paycheck before heading to work. I had just completed my first year as a reporter for the Daily Oklahoman, the state’s leading daily newspaper. Glued to my car radio for more details, I hurriedly completed my transaction at the drive-up window and raced to the office, which I knew would be in all-hands-on-deck mode.

It was. The newsroom was in bedlam as editors on the afternoon paper, the Oklahoma City Times, frantically tore up their front page to get details of the assassination into at least a portion of the press run. Meanwhile, editors of the morning paper on which I worked, the Daily Oklahoman, were huddled to draw up plans for the next day’s paper. While we awaited our assignments, we reporters eagerly snatched bulletins from the AP and UPI teletypes from the hands of the copyboys whose job it was to monitor “the wires.”

Eventually, my City Editor began handing out assignments. The star writer and a photographer were quickly dispatched to Dallas, which is just 300 miles from “The City,” as Oklahoma City was known. Others were assigned to do the stories on the transition of power to Lyndon B. Johnson, the grieving widow Jackie, the nation in shock and mourning. A couple of reporters were assigned to gather reaction from leaders in our state: members of Congress, state legislators, city and county officials, federal judges and law enforcement officers. Two or three others went out into stores and bars for the man-in-the-street reaction.

My assignment: Write a story about LBJ’s last visit to Oklahoma City. The Vice President had been to the state a few months before, for what I no longer remember. Researching our clip-files for stories on the visit and calling local dignitaries who had met with LBJ, I put together a 15-inch story that was published deep inside that Saturday morning paper. I was grateful to have something productive to do, and the concentration required to report and write the story took my mind off the horror of the events in Dallas. I thought of my sister Joan, who lived in Greenville, just a few miles east of Dallas, and her husband Dick, whose parents lived in Dallas.

Most of us worked all weekend to continue to report what was certainly the biggest story any of us had ever covered. By Sunday, we were wrung-out, exhausted after two days of 12- to 15-hour shifts, thinking that on Sunday there might be time to relax, unwind, maybe even smile. But of course there wasn’t, because Jack Ruby decided to take justice into his own hands in the Dallas Police Station that day.

And the presidential funeral – that terrible day of national mourning marked by a 2-year-old boy’s salute to his father’s passing coffin and a riderless horse with empty boots turned backward in the stirrups — still lay ahead on Monday.